The Winchester .350 Legend is currently being offered in its XPR bolt-action rifles.

Jot down a list of the world’s best hunting cartridges and you’ll find many of them were developed by Winchester. The list includes the .30-30, .270, .308, a .300 magnum and the various short magnums just to name a few. It’s a Who’s Who list of the finest hunting rounds ever designed.

Winchester recently released another new cartridge: the .350 Legend. And while most gun writers agree there are no real power gaps left in our hunting cartridge lineup, Winchester has managed to address a specific need. In the process, it developed a new cartridge that should appeal to a large percentage of big game hunters in this country.

That specific need has to do with recent changes to game laws that allow hunters to use straight-wall cartridges for hunting deer. In my home state of Ohio—as well as many other states like Indiana, Illinois and Michigan—hunters had been required to use muzzleloaders or shotguns with slugs to hunt deer during firearms season. Over the last decade, several states have eased the restrictions on the use of rifle calibers but limited the centerfire options to straight-wall cartridges.

These new laws offered a number of alternatives to slug guns, and the demand for rifles chambered in .45-70, .450 Bushmaster, .450 Marlin and other straight-wall rounds increased dramatically. While these rounds are effective on deer, they’re also hard-recoiling, and a .45 caliber projectile is hardly required to take down the average whitetail. Enter the .350 Legend.

“The .350 Legend is a high-performing, straight-walled cartridge that dominates in velocity, energy, recoil and affordability, all of which are vital to our customers,” says Matt Campbell, vice president of sales and marketing for Winchester Ammunition.

Based on a modified .223 Rem.’s rimless case, the .350 Legend shares the .223’s .378-inch base diameter and headspaces off the case mouth. SAAMI adopted the cartridge this year and gives an overall case length of 1.171 inches, a minimum overall length of 2.125 inches, a maximum overall length of 2.260 inches, and a pressure of 55,000 psi. Water capacity for the Legend case is 36.5 grains, and it takes a Small Rifle primer.

The Winchester .350 Legend case is similar in many respects to the .223 Rem., but the two cases are not interchangeable. 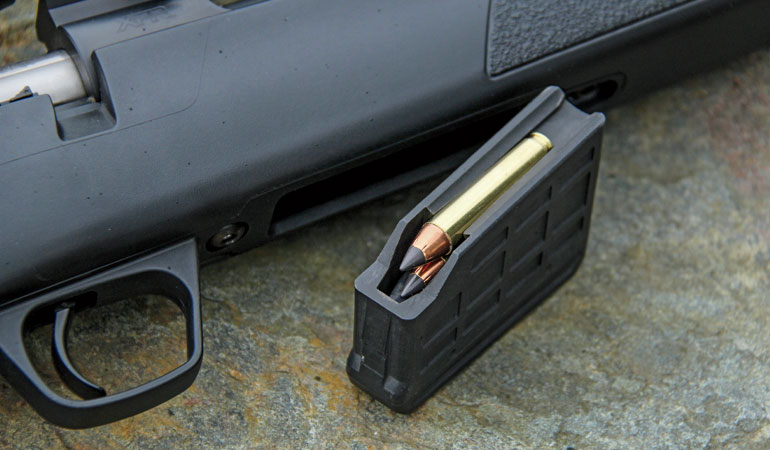 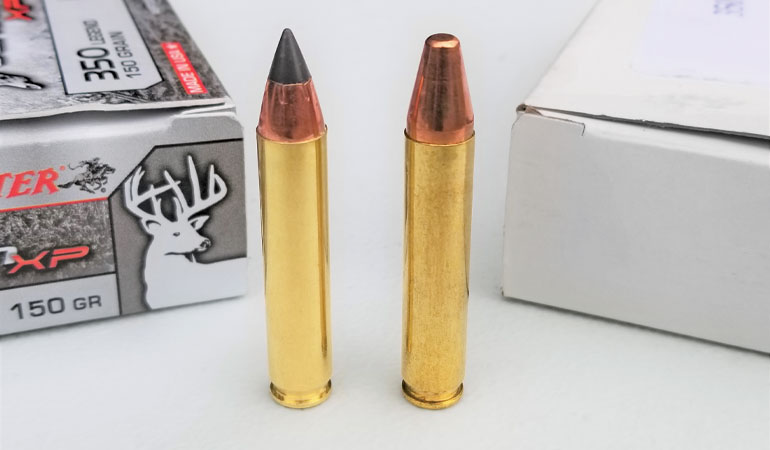 “The .350 Legend brass is similar but definitely not the same as .223/5.56,” says Nathan Robinson, Winchester media relations manager. “The .350 Legend has a larger body diameter just above the head than the .223 Rem.”

Robinson says this increased diameter ensures sufficient taper for proper feeding and extraction, and .223 Rem. brass, therefore, will be undersized in a .350 Legend chamber. Consequently, the company does not recommend sizing .223 Rem. brass to make .350 Legend cases.

Winchester did plenty of legwork in developing the cartridge to ensure it would meet states’ criteria for straight-wall deer cartridges, reaching out to various state wildlife agencies to ensure it would be legal. The Legend’s overall case length of 1.71 inches, for instance, is well below the 1.8-inch maximum length adopted by states like Michigan.

The last thing Winchester wanted was to create a situation in which hunters suddenly find themselves afoul of local game laws, and to that end, the company also prints the cartridge’s overall length and bullet diameter on the box should a hunter encounter a game warden who is unfamiliar with the round.

The Deer Season XP load is designed expressly for deer hunting. It has an advertised velocity of 2,325 fps and a ballistic coefficient of .223. Winchester says the .350 Legend drops 7.6 inches at 200 yards and just over 28 inches at 300 yards when zeroed at 100 yards.

Last but not least, the .350 Legend is a cheap round to shoot. Expect to pay about $1 per shot for hunting ammunition, and 145-grain white box target loads will come in at between 50 and 60 cents a shot. That’s about as inexpensive a deer round as you can get.

Gun maker Winchester is currently offering its XPR bolt-action rifles chambered in .350 Legend, although this cartridge’s design also makes it a natural choice for AR rifles.

CMMG is the first black-gun company to officially adopt the .350 Legend, and currently the company offers magazines, barrels, uppers and complete Resolute rifles chambered for it. You can rest assured that more AR manufacturers will jump aboard the Legend bandwagon in the months to come.

I have a vested interest in the .350 Legend. Living in Ohio, I was thrilled to hear Winchester had developed a cartridge specifically designed to meet the requirements in my home state. Having grown up shooting 12-gauge Foster slugs at deer (emphasis on the word “at”), I was happy to see there was a new cartridge providing plenty of energy and a flat-enough trajectory to handle most deer hunting in the eastern United States without the abusive recoil of a slug gun or one of the big .40-plus straight-wall rounds.

With its 22-inch barrel the XPR in .350 Legend weighs a modest six pounds, 12 ounces, and since the Legend functions in short actions and doesn’t require a magnum-length barrel, the rifle is just 42 inches long. Reduced overall length is an advantage when hunting in straight-wall-only states, where most hunters use tree stands or ground blinds and will benefit from a short, maneuverable hunting rifle.

The rifle I tested was the entry-level XPR, which comes with a basic black synthetic stock and matte blued finish and carries a suggested retail price of $549. The Legend is also found in the rest of the XPR line, 14 models in all. Demand for .350 Legend-chambered rifles is so high the owner of the gunshop where I picked up my sample rifle asked to buy the gun if possible when I was done with it because he’d had so many requests.

The .350 Legend is one of the most mild-mannered centerfire hunting cartridges I’ve fired. Recoil is little more than a slight shove, and the impact is mitigated by the XPR’s Inflex recoil pad. On the same day I tested the .350 Legend I sighted in a 6mm Creedmoor rifle, and to my great surprise, the recoil from the Winchester was notably less. Furthermore, the .350 Legend’s noise and muzzle blast are minimal. With low velocities and modest muzzle pressures, this gun cracks but doesn’t roar, and even the most sensitive shooter should be able to master a rifle so chambered.

Winchester’s Deer Season XP load promises a muzzle velocity of 2,325 fps, and on the range velocities were slightly higher, averaging 2,345 fps when the chronograph was placed 10 feet from the muzzle—confirming Winchester’s claim that this is the fastest straight-wall cartridge on the market.

The company’s 145-grain FMJ white box ammo printed velocities that were slightly lower, and the two loads strike roughly at the same point of impact. This means you can sight in your .350 Legend rifle using FMJ ammunition that costs 50 cents a round and when you’re ready to take the gun hunting you won’t have to make major adjustments to dial in your deer hunting load.

As mentioned, the published ballistics have the .350 Legend Deer Season XP dropping seven to eight inches at 200 yards when zeroed at 100 yards. I find it more practical to zero the rifle at 150 yards, which means the Deer Season XP bullet will strike about two inches high at 100 yards and will drop four inches at 200 yards. For practical hunting ranges that translates to holding on target for deer-size game.

Accuracy was good, with one 100-yard group measuring an inch while the average for the Deer Season XP load was just over 1.2 inches. The FMJ ammo shot a respectable 1.3 inches. That’s better accuracy than I’ve ever managed with a slug gun, and the .350 Legend produces those groups at a lower cost, both in the price of ammo and in recoil.

Many shooters respond to new cartridge releases with skepticism. The .350 Legend cartridge doesn’t try to impress buyers with blistering ballistics that bolster notions of hitting steel targets thousands of yards away. In fact, it’s one of the few cartridges released in recent memory that actually brags about besting the ballistics of the century-old .30-30, although this power gap is marginal.

The .350 Legend does fill a void in today’s commercial cartridges—albeit a manmade one. With the introduction of the Legend there’s now a straight-wall cartridge that’s affordable, fun to shoot and widely available. When Winchester sells brass it should be affordable, and the company is offering several .350 Legend-specific bullets. But even those shooters who don’t roll their own ammo can afford to shoot this cartridge.

Few rounds have ever been as closely aligned with a single game animal as the Legend is with the whitetail deer. But if you’re choosing an animal to be the face of your new cartridge, there’s no better option since about 90 percent of American big game hunters pursue these deer.

This doesn’t mean the Legend is solely suited for whitetails. With a tough bullet this rifle will be perfect for hogs out to moderate ranges, and this cartridge will make an excellent option for hunting black bears over bait. It’ll also serve well as a low-recoil varmint and predator gun, and it’s the ideal first rifle for a new hunter.

My first deer gun was a Winchester Model 1300 Black Shadow 12-gauge pump. It came with a smoothbore 21-inch barrel, and that gun was neither accurate nor fun to shoot. Instead of handing the Black Shadow down to my children, I’ll put them behind the more genteel but equally deadly .350 Legend.

Have we come full-circle on our choice of deer rounds, eschewing the last remnants of the magnum age in favor of light-recoiling cartridges that fire big bullets at modest velocities? Probably not. But the .350 Legend is a cartridge that deserves the attention it is receiving.

It won’t propel a high-BC bullet at supersonic velocities to a mile or more, but it’ll kill deer and pigs and black bear and other North American game effectively out to a couple hundred paces, and it will do so without breaking the bank. That’s why it’ll be a winner.