I recently had the opportunity to test the 6.5 Creedmoor load featuring the company’s 135-grain Hybrid Hunter bullet, which boasts a G1 ballistic coefficient of .584 and a G7 BC of .303.

The “hybrid” in the name refers to its ogive, which incorporates both a tangent ogive and a secant ogive. This gives you the best of both worlds: The secant portion results in lower drag—hence less drop and less wind drift— while the tangent portion makes it less fussy about seating depth.

As the name also indicates, it’s a hunting bullet, albeit one that takes a different tack to terminal performance. It features a thin jacket and is designed to expand rapidly. The company’s literature says it will produce two to three inches of penetration and then expand for a wound channel of, it claims, 15 inches.

This is definitely something to keep in mind. If you’re looking for a deer or antelope bullet that can handle a quartering or harder angle and expect to break and/or exit the off shoulder, this may not be your bullet. But if you’re wanting a bullet that will produce lightning-quick kills via massive energy dump, the Classic Hunter should provide that.

As you would expect from a company with a legendary reputation, Berger ammunition is high-quality stuff. It’s loaded with Lapua brass, which the most demanding reloaders will tell you is among the best brass brands out there.

I weighed 10 loaded rounds—a quick way to gauge the consistency of bullet, case and powder-charge weights—and the variance from low to high was a mere 1.0 grain. Expressed another way, the standard deviation for the 10-round sample was an infinitesimal 0.33 grain. Bullet runout was perhaps even more impressive. The same 10 rounds yielded just .0016 runout, measured with Hornady’s Lock-N-Load concentricity tool. 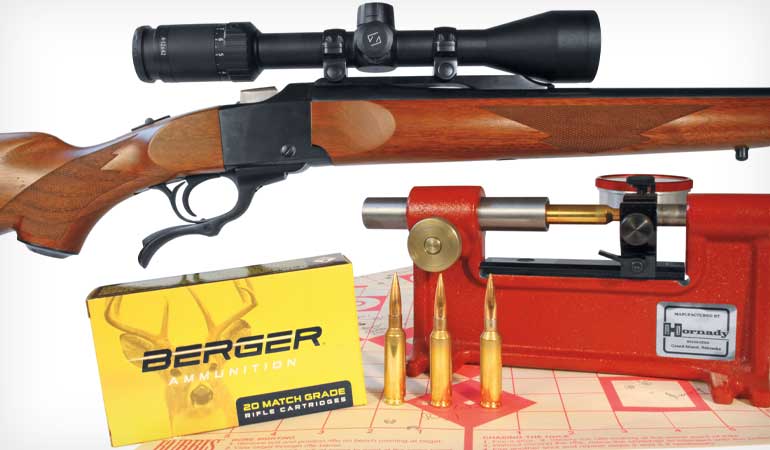 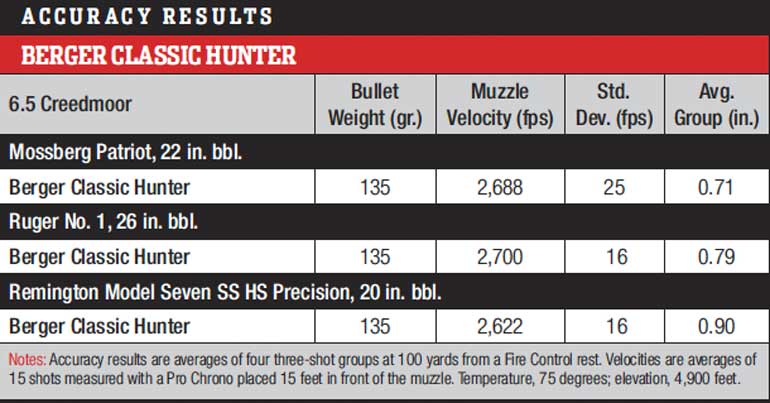 And the proof was definitely in the pudding. You can see the results in the accompanying chart.

Here are some additional data to chew on. The velocity data (averages, standard deviations, etc.) were calculated on the basis of 15 shots—larger than our usual rifle-testing sample size—and with one exception, extreme spreads were good: Ruger, 44 fps; Remington, 62 fps; and Mossberg, 91 fps.

One of the rounds through the Mossberg was an outlier, 64 fps below the average. It happens, and it’s why the standard deviation in the chart for the Mossberg is higher than the others. But then again, who in their right mind would argue with a 0.71-inch average from a factory production rifle?

Also, I’ve owned the Ruger No. 1 for a number of years, and this is the best it’s ever grouped—and that includes handloads I’ve built for it. And the fact that the ammo shot consistently well across the board in all three rifles kind of proves the point about the hybrid ogive. If it was a full secant ogive, you probably wouldn’t see three random guns with chambers that could be anywhere on the specification spectrum shoot so consistently well.

Going back to performance, I’ve added a second chart on performance for you numbers-starved folks. There’s nothing earth-shattering here, and it’s what you should expect from an aerodynamic bullet. You’ll note how little difference there is downrange in terms of drop and wind drift, despite a nearly 80 fps difference in launch velocity.

The energies are excellent across the board for deer-size game, and coupled with a sectional density of .277, the bullet should deliver the expected performance. If you want to calculate distances farther than that, have at it. Three hundred yards is my limit for most game in most places under ideal conditions.