With plenty of speed and muscle and a superb pedigree, the Hornady .300 PRC has a decent shot of being a frontrunner in a crowded field in years to come.

Have you ever heard of the 6.5 Creedmoor? Of course you have—that is, unless you’ve desperately avoided shooting ranges, gun magazines, firearms retail stores, outdoor television and the Internet for the last several years. Designed by former Hornady ballistician Dave Emary, the 6.5 Creedmoor is a juggernaut that has accrued a massive following more quickly than any centerfire rifle round in living memory.

It also changed the way we think about hunting- and target-cartridge design. During the magnum craze of the mid-20th century, fast belted magnums were in vogue, and their long-range prowess and killing power were the stuff of legends. But the 6.5 Creedmoor was something different—efficient, inherently accurate and, most importantly, designed from the outset to use long, heavy-for-caliber, wind-bucking bullets. Competitive long-range shooters adopted it quickly, and hunters followed right behind.

But here’s something you may not know. Before the Creedmoor broke cover, there was another long-range centerfire cartridge in the works at Hornady headquarters in Grand Island. Like the 6.5 Creedmoor, this secret cartridge utilized a 30-degree shoulder and an unbelted cartridge case with minimal taper.

The cartridge also had a long neck to accommodate high ballistic coefficient bullets, and it was designed so those heavy-for-caliber bullets wouldn’t rob case capacity, making it a highly efficient round. Unlike the Creedmoor, though, this secret cartridge was a .30 caliber magnum.

The cartridge, which was based on a necked-down .375 Ruger with the shoulder moved back, was initially known as the .30-375 Ruger and was the brainchild of Hornady’s Joe Thielen. Thielen, who was serving as Hornady’s assistant director of engineering when the .375 Ruger was announced in 2007, wanted to design the ultimate .300 cartridge for long-range competition.

Originally, Thielen began experimenting with the .30-8×68, but 8×68 brass is hard to find even when you work for one of the nation’s largest ammunition manufacturing companies. In the .375 Ruger Thielen found the parent case he’d wanted, and the idea for the ultimate .30 caliber long-range round began taking shape.

“I needed a 1,000-yard rifle that offered widely available brass, and the .30-375 Ruger worked perfectly,” Thielen said. “The .375 Ruger case didn’t have a belt, so it was possible to full-length resize the brass, and headspacing was easy.” But the most important feature of his new creation, Thielen said, was its ability to work with a wide range of heavy bullets. 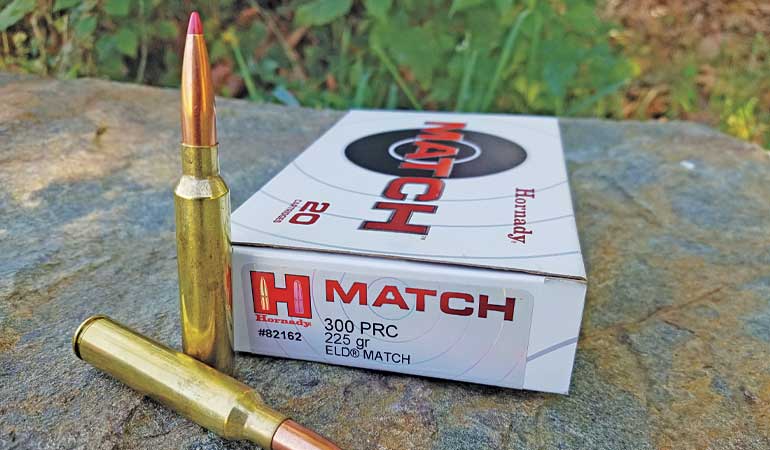 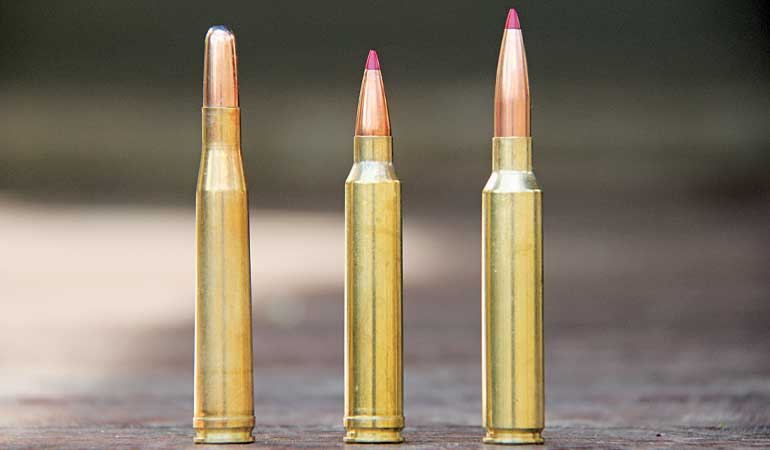 “The .300 Winchester Magnum’s case design won’t allow it to hold really heavy bullets with a long ogive,” Thielen said. His new creation was perfectly capable of holding those really long bullets, and it proved to be extremely accurate.

Thielen’s experimentation was well timed. While he was tweaking his new .30 caliber creation, long-range rifle shooting was amassing an enormous following across the country. As competition grew more intense, every competitor was looking for an edge, and the right cartridge was the important first step toward success.

It’s been over a decade, but Thielen’s creation is now mainstream. The new cartridge has been SAAMI certified and has been given a new name: the .300 PRC.

Before you dismiss the .300 PRC as just another new round trying to grab some shelf space alongside America’s most popular hunting and shooting calibers, understand the PRC will indeed do things that factory .300 Win. Mag. ammunition cannot.

For starters, the PRC case design accommodates really long, really heavy projectiles. Hornady is currently offering two factory loads for the .300 PRC. The, ahem, lightest of those is the 212-grain ELD-X, part of the Precision Hunter line. The Match ammo offering is loaded with a 225-grain ELD Match bullet. The Precision Hunter load is listed at 2,860 fps, and the Match load is rated at 2,810 fps.

Indeed, the .300 PRC offers a level of versatility unmatched in other .300 magnum cartridges. It’ll fit in a .30-06-length action and yet handles a full range of bullets, and the lack of a belt and minimal body taper provide an efficient powder column so shooters can eke out every foot per second. In fact, Neal Emery, Hornady’s senior communications director, told me the .300 PRC’s design opens the door for Hornady to increase bullet weight above the top-end 225-grain Match offering.

Does that extra bullet weight matter? It does if you’re a long-range shooter. Emery said the PRC’s 225-grain pill fired at a velocity above 2,800 fps is perfectly suited for extreme-long-range competition, and the 212-grain ELD-X hunting bullet is still carrying enough velocity to expand on game at 1,250 yards. (To clarify, Hornady isn’t suggesting that you shoot game in excess of 1,200 yards with this round, but it’s illustrative of how well the new bullet and load hold onto velocity at extended ranges. In fact, the PRC is being evaluated by the Navy for its extended long-range sniper platform.)

Despite its impressive capabilities at long ranges, the .300 PRC isn’t a brutal cartridge in terms of recoil. Emery said it’s above the .300 Win. Mag. but only slightly so, which will make it manageable for most shooters. The rifle I tested—a GA Precision with a 26-inch fluted barrel and a Templar VII action—wore a brake, so I didn’t get the full effect of the .300 PRC’s punch on the bench. And in that rifle with the brake installed recoil was not a factor.

The PRC was designed to be a target round, and the rifle I tested was an absolute tack driver. I mated the PRC to a Trijicon AccuPoint 2.5-12×42 optic in anticipation of a South African hunt, and the rifle, load and optic combo provided plenty of confidence during pre-safari testing.

At 100 yards the average group size with the 212-grain ELD-X Precision Hunter load was 0.67 inch, and average group sizes with Match ammunition was just 0.56 inch. My best group measured 0.41 inch, and the “worst” three-shot group was still under an inch.

At 200 yards the test group I fired to check my zero measured 0.95 inch, and one bullet punched a hole in the center of the bullseye. I didn’t fire the .300 PRC farther than 200 yards in the States because I knew I’d have ample space to stretch the cartridge’s legs in the open savannah of KwaZulu-Natal in South Africa.

It’s worth noting that the velocity figures I recorded when testing the PRC were higher than those listed by Hornady. The 212-grain ELD-X attained an average velocity of 2,905 fps when measured with a chronograph 10 feet from the muzzle, and the 225-grain Match ammunition averaged 2,841 fps.

Crusader Safaris’ Umkomaas Valley hunting camp turned out to be an ideal location to determine just what the PRC could accomplish both as a hunting and as a long-range target cartridge as well as evaluate Trijicon’s optics since lighting conditions vary from dim forests to sun-bleached slopes.

Our primary quarry was nyala, the elegant spiral-horned antelope that navigate between the open hillsides and thorn forests. The average shot in that country is between 100 and 200 yards. But if you stumble upon a good nyala in dense brush, you may have to snap shoot at a fraction of that distance, and a cross-canyon, quarter-mile shot might be required, too.

On the first afternoon guide Rad Robertson located a good bull on a distant hillside, and our only real hope was to make a wide arc around the mouth of the drainage and try to stalk the bull on the side of the hill.

An hour later we were on the same slope as the bull, and Rad was leaning against a tree with his binoculars in hand, trying to be certain that the bull nyala we saw in the trees was indeed the one we were after. When we finally got into position, the bull was quartering away at 70 yards, so I aimed for the off-side shoulder and pressed the trigger.

As the roar of the Hornady .300 PRC exploded across the slope, I saw the bull turn a slow half-circle in the AccuPoint scope. Then he was gone. I knew the shot had been clear and I’d had a solid rest, so the bull should have been close to where he’d been hit. Indeed, he’d only made it about 20 yards downhill before piling up.

Shots on the trip ranged from Neal Emery’s 40-yard shot on a massive old nyala to a shot he took on a wildebeest bull at 388 yards that dropped the animal where it stood. The ELD-X bullet performed equally well on more than a dozen animals ranging in weight from 100 to 800 pounds.

After the hunt was over, our party found a wide valley where we could test the PRC at greater distances. Using the 4DOF app from Hornady, we quickly had elevation holds out to 1,270 yards—the farthest point we could shoot. An anthill at that distance became an impromptu bullet trap, and we managed to punch several holes in the anthill at that distance.

The Hornady .300 PRC required a come-up of 34 m.o.a. and a wind hold of six m.o.a. for a 10-mph crosswind at that distance. By comparison, a .300 Win Mag firing Hornady’s 178-grain ELD Match load requires an additional five m.o.a. of elevation and two m.o.a. more of wind hold.

Are the .300 PRC’s qualities enough to earn it a spot among the top .300 magnums? Time will tell. Fans of the .300 Win. Mag. will likely be quick to scoff at the PRC, but there’s no question that the new cartridge from Hornady allows shooters to do things that you simply cannot with a Win. Mag. It will likely appeal primarily to serious shooters, and in addition to Hornady’s two current factory loads, components will allow reloaders to tweak and adjust their loads to meet their needs. With plenty of speed and muscle and a superb pedigree, this dark horse has a decent shot of being a frontrunner in a crowded field in years to come.