There are currently at least 10 different popular 6.5mm rifle cartridges; five of them, including the 6.5 Creedmoor, were introduced in just the last decade or so. These cartridges span the spectrum from modest, efficient rounds to barrel-burning dragons that spew 6.5mm bullets at shocking speeds.

Do we need them all? Of course not. But clearly, shooters want them. So which to choose? Which offers the best all-around capabilities? Inherent accuracy? Long-range reach? Which are best for hunting? Here’s a look at 10 of the top 6.5 rifles available. We’ll go more or less chronologically, starting with the Scandinavian favorite introduced 110 years ago.

Undoubtedly the best of a flurry of 6.5mm military cartridges engineered over a century ago, the 6.5×55 provided excellent ballistic performance coupled with moderate recoil. It capably made the transition to modern times, although American ammo companies governed by SAAMI load it gently out of caution for vintage rifles with potentially weak actions.

If you want the best out of the 6.5×55, you must either handload it or purchase European-loaded ammo by Norma, Lapua or the like. It has about 11 percent greater case capacity than the 6.5 Creedmoor—the current gold standard—so when loaded to similar pressures, it produces a step up in velocity. It goes without saying that these loads are suitable only for use in strong actions in good condition.

Because of its 3.15-inch overall cartridge length, the 6.5×55 must be paired with a long action. On the plus side, this makes it easy to seat long, highly aerodynamic bullets well out of the case so they don’t intrude on propellant capacity. Magazine capacity runs four or five, plus one in the chamber.

Paired with a tough bullet, the 6.5×55 is adequate for elk, but hunters must place shots carefully. As many proponents point out, the cartridge has been used successfully on tens of thousands of Scandinavian moose. This is true, but keep in mind that Scandinavian moose are much smaller than our North American species, and they are typically shot at close ranges, where the 6.5×55 has adequate energy.

Of course, the “Swede” is superb for deer-size game. For deer, pick a 120- to 143-grain bullet. For bigger, tougher game, opt for monometal versions or heavy Nosler Partitions, Swift A-Frames or the like.

My current favorite all-around 6.5×55 hunting load pushes a 129-grain Hornady InterBond at 3,030 fps. I took several plains game species in Mozambique with it, including a sable. Fired from a Ruger M77 Hawkeye African, it groups under an inch at 100 yards. 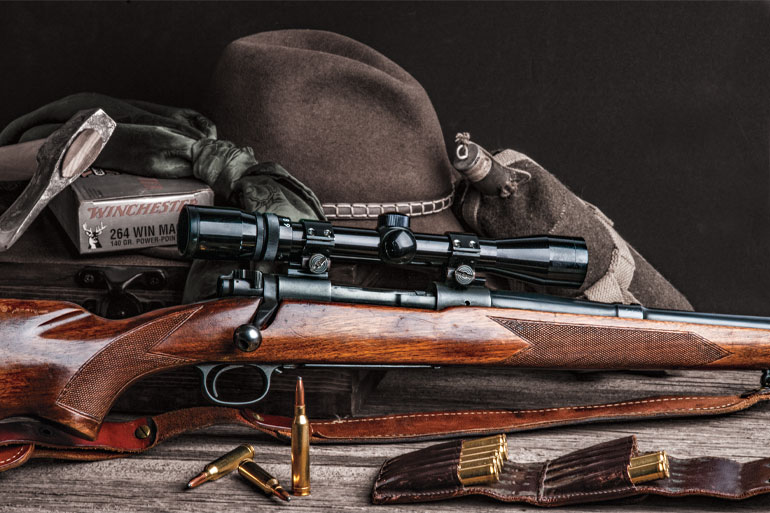 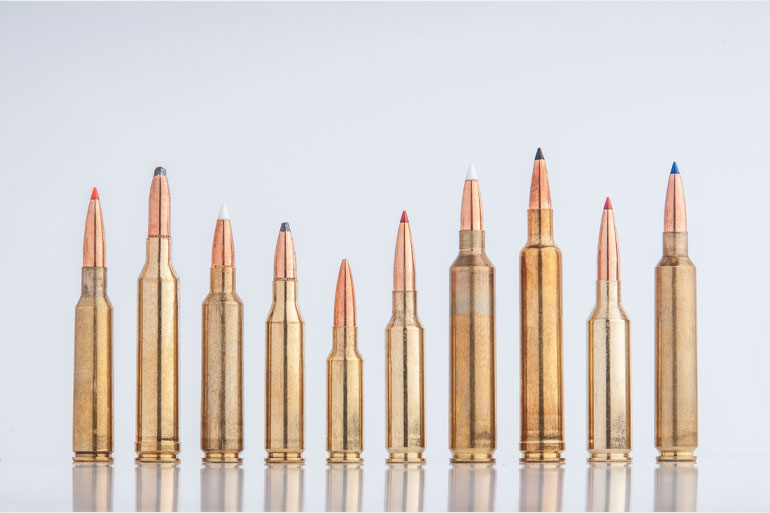 This half-century-old cartridge was the first proper 6.5mm hot rod. Based on a shortened, necked-down version of the .375 H&H case, it was advertised to drive 140-grain bullets at 3,200 fps. Velocity was rarely quite that high, but it did provide impressive downrange results.

Created to fit into standard .30-06-length actions, the belted magnum case dictates that capacity in most bolt-action rifles is three in the magazine plus one in the chamber.

Remington’s 7mm magnum essentially killed off the .264, and today the .264 Win. Mag. is a cartridge for traditionalists with a flair for the unusual. Ballistically, it’s still a good cartridge, but it’s no more capable than modern 6.5s such as the 6.5 PRC and 6.5 Wby RPM, which have superior design characteristics to recommend them.

This cartridge crosses into the high-velocity territory that necessitates a tough, controlled-expansion bullet to prevent excessive fragmentation on impact, particularly for use on big-bodied game. That said, with savvy bullet selection, the .264 Win. Mag. works wonderfully on all North American big game up to and including elk.

Consisting of a .284 Win. case necked down to hold 6.5mm bullets, this wildcatters’ favorite quickly became more popular than its parent cartridge, and it was eventually legitimized by Norma ammunition in 1999. While it can be shoehorned into some short-action rifle models, it’s at its best in long actions where bullets can be handloaded long so bases don’t intrude into the powder reservoir.

Of rebated-rim design, the 6.5-.284 features a case head that fits standard bolt faces, with an expanded body diameter that enables the cartridge to hold more gunpowder. Most rifles contain four or five rounds in the magazine, plus one in the chamber.

For a time, the 6.5-.284 was the darling of long-range benchrest competitors, and at least one 1,000-yard world record was set with it. Its popularity has faded a bit, mostly due to the 6.5 PRC cartridge, which offers a trace more velocity and fits into short-magnum-action rifles.

However, the 6.5-.284 is still a superb choice for the discerning open-country hunter and is adequate for all hooved game up to and including elk. Pick a tough, bullet with a high ballistic coefficient to get the best out of it.

Introduced in 1997, the .260 Rem. presaged the 6.5mm frenzy. Simply a .308 case necked down to hold 6.5mm bullets, it was a popular wildcat before being adopted by Remington.

It’s often been compared to the 6.5 Creedmoor. Proponents assert that the .260 has a bit more capacity and produces a shade more velocity. On the downside, it’s not optimized for long, high-BC bullets like the Creedmoor is. Plus, the .260 has gained a reputation for picky accuracy—probably due to varying and often sloppy chamber throat dimensions—while the 6.5 Creedmoor has the opposite reputation. At this point, the .260 appears to be on a rapid slide into obscurity.

Most bolt-operated actions contain four or five in the magazine, plus one in the chamber. The .260 Rem. has also been successfully adapted to large-frame AR-type semiauto rifles.

Typical 140-grain bullets exit the muzzle at about 2,750 fps. Lighter 120-grain versions offer about 2,900 fps. It’s an outstanding deer cartridge, and it serves adequately as a crossover for elk as long as a tough, heavy bullet is chosen and ranges are kept moderate.

In a bolt-action rifle it’s the wimpiest of all the popular 6.5mms. However, when compared to the .223 or 6.8 SPC in an AR-15, it offers profoundly better energy and downrange capability. It hits significantly harder than any 7.62×39 bullet out of an AK-47. Plus, it’s got reach. I’ve shot magazine-compatible 6.5 Grendel factory ammo to 1,000 yards with great results using a 24-inch-barreled AR-15.

As a hunting cartridge, the Grendel is lacking on larger game like elk because it simply doesn’t drive heavy enough bullets fast enough. But if you want a very moderate recoiler for close hunting on deer-size game, it’s wonderful.

Ah, the “Creed”—the cartridge responsible for the current 6.5mm feeding frenzy. Introduced as a 1,000-yard competitive cartridge in 2008, the 6.5 Creedmoor is a result of the combined efforts of Hornady’s lead ballistician David Emary and champion long-range shooter Dennis DeMille. It crawled away from the starting line and then meteorically launched to cartridge stardom—opening American shooters’ eyes to a new world of long-range precision ability.

Stringent chamber throat design and dimensions make the 6.5 Creedmoor arguably the single most inherently accurate factory cartridge available today. Most hunting rifles contain four or five in the magazine plus one in the chamber.

Because it’s designed specifically for long, aerodynamic projectiles, the 6.5 Creedmoor is most comfortable with 135- to 150-grain bullets. Velocity with common 140-grain bullets runs about 2,700 fps. Handloads achieve a bit more. While the Creedmoor is at its best inside about 1,200 yards, depending on altitude and other environmentals, I’ve shot it to 1,400 yards with quite good success. For hunting, Hornady’s 143-grain ELD-X is probably the single best all-around bullet for the 6.5 Creedmoor.

Although it’s an outstanding hunting cartridge for deer-size game and is certainly adequate for elk—assuming careful bullet choice, precise shot placement, and moderate range limitations—the 6.5 Creedmoor isn’t the dragon-slayer many suggest it is. While it may not be just a cartridge like any other, it cannot escape the realities of physics—particularly velocity and energy constraints.

Announced in 2013, this was the first cartridge to wear the Nosler name. At the time, it was the fastest factory 6.5mm cartridge in existence. Utilizing a .300 Rem. Ultra Mag case shortened and necked down to hold 6.5mm projectiles, the .26 Nosler is rated to produce 3,300 fps with 140-grain bullets. Pair those speeds with modern ultra-high-BC bullets, and you’ve got eyebrow-raising long-range potential. Most rifles hold two or three rounds in the magazine.

I worked with a .26 Nosler the fall before it was introduced, and hitting steel targets out to 800 yards was almost laughably easy. Wind drift and time of flight was shockingly low. It’s a truly capable extended-range hunting cartridge.

There are some significant downsides, though. Because the .26 Nosler is so overbore (the relationship of propellant reservoir to bore diameter), it’s a bit finicky accuracy-wise. And don’t bother to try to develop reduced loads. You’ll just find inconsistency and potentially some odd pressure spikes that are understandable only to ballistic engineers. The .26 Nosler was built for speed, and it likes to be run hot.

Stoked with heavy-for-caliber Partition or E-Tip Nosler bullets, the .26 Nosler is good for elk. Loaded with 120- to 140-grain AccuBonds, it’s a deer-dropping death ray.

When the 6.5-.300 Wby. was introduced, I shot the rifle to 1,100 yards and hunted wild hogs with it. I took a good boar at 70 yards, driving a 127-grain Barnes LRX through the quartering-away hog and dropping it in its tracks.

Although massively overbored and a bit temperamental like the .26 Nosler, it’s an accurate cartridge. Loaded with a tough, high-BC bullet, it’s a bona fide extended-range hunting cartridge ideal for deer, pronghorn, sheep and the like.

Beware of soft, rapid-expansion bullets. At 6.5-.300 velocities, they’ll likely pancake on impact and fail to penetrate adequately. Choose bonded-core or mono-metal bullets for hunting. Adam Weatherby’s choice for elk is a 140-grain Swift A-Frame. Yes, it gives up that coveted super-high BC, but it can be counted on to hold together and kill cleanly at any reasonable distance.

The 6.5 PRC (Precision Rifle Cartridge) made its debut two years ago. It is a short-action magnum created by necking down the .300 RCM. Importantly, it’s engineered to hold long, aerodynamic projectiles seated well out and to fit into standard short-magnum actions. All things considered—efficiency, barrel life, inherent accuracy and adequate authority—it’s arguably the single best 6.5mm hunting cartridge ever devised.

Generating nearly 3,000 fps with popular bullets in the 140-grain range, it provides a great deal of downrange performance without crossing the line into the temperamental territory of overbore 6.5s. The 6.5 PRC trounces the milder 6.5mms such as the 6.5 Creedmoor, shades the 6.5-.284 and matches the .264 Win. Mag.—and it fits into light, compact, fast-cycling short-magnum actions. It’s superb for deer-size game and adequate for elk.

It’s debatably already the second-most popular of all the 6.5mms. Only the Creedmoor is available in more different rifle models from more different manufacturers. Most rifles hold three in the magazine, and high-capacity, detachable-box rifles are available.

Loaded with a heavy 140- to 156-grain high-BC match bullet, the 6.5 PRC is capable to a mile on large steel targets. For hunting, few things are more versatile than a midweight, controlled-expansion bullet such as a Barnes LRX, Nosler AccuBond, Swift Scirocco II or Federal Terminal Ascent driven to 3,100 fps.

Introduced just a few months ago, the RPM (Rebated Precision Magnum) is a complete departure from traditional Weatherby design, and it has made a tremendous splash among the mountain-rifle community. Why? Because it’s the first 6.5mm that both fits into an extremely sleek action and offers true magnum-6.5 ballistic performance.

Capacity is four in the magazine plus one in the chamber. Recoil is zesty but polite. On-impact performance should prove excellent for many big game species.

Only Weatherby rifles will be available chambered in 6.5 Wby. RPM. However, the company offers a broad selection of rifles built for different purposes and guarantees one m.o.a. accuracy in every one of them.