When a cartridge is fired, a progressive burn of the propellant converts it to rapidly expanding gas that exerts an equal amount of pressure in all directions. Maximum recommended pressure for a rifle cartridge is usually dictated by the action strength of the rifle for which it is developed.

For many years the copper crusher method was used throughout the shooting industry for determining chamber pressure, and you can see some of the equipment required in the lead photograph accompanying this article. A small copper cylinder of predetermined compressibility is placed into a yoke device that is clamped to the barrel in its chamber area, where pressure is highest.

One end of a piston is positioned through a hole drilled through the wall of the barrel. Its opposite end is against a copper cylinder while the other end of the cylinder rests against a stationary anvil. When a round is fired, pressure exerted against the piston “crushes” or shortens the cylinder. The higher the pressure the shorter the cylinder becomes. After the cylinder is removed, its length is measured with a micrometer and the amount of compression is converted to copper units of pressure (c.u.p.) by comparing the length to a tarage chart provided by the manufacturer of each lot of cylinders.

Today, most of the industry has converted to the piezoelectric transducer and uses the common pounds per square inch (psi) as its unit of measure. While the initial investment for the transducer is more expensive than a copper crusher system, it is quicker to use and provides more accurate data.

When a cartridge fires, pressure exerted on the transducer by the wall of the case is transferred to a special crystal that responds to mechanical force by generating an electrical charge in direct proportion to the applied force. Computer software converts the signal to psi. 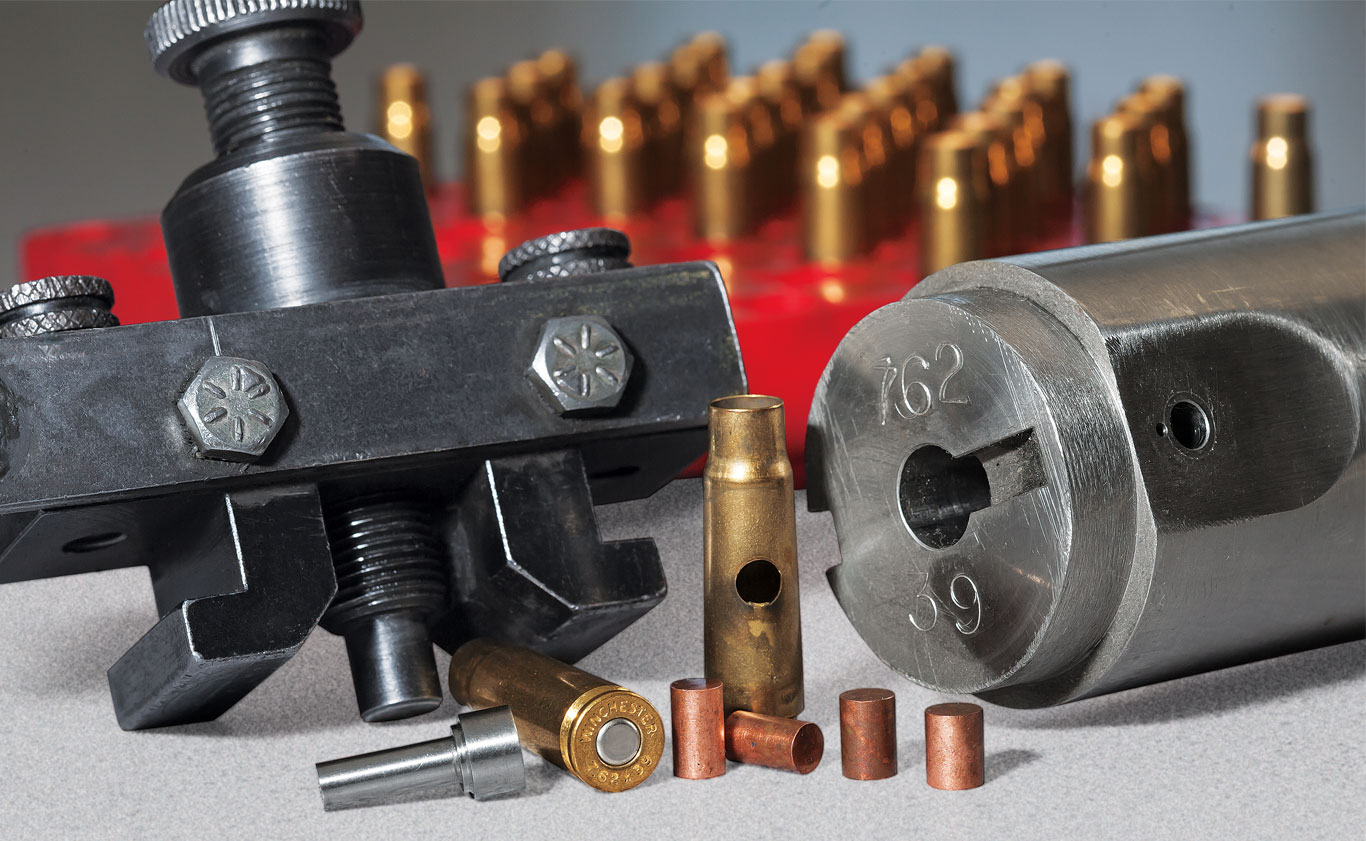 While the same amount of pressure is exerted in all directions during firing, actual pressure exerted is determined by surface area. To simplify by exaggeration, let’s say the base surface area of a bullet is one inch. If the powder in the cartridge that bullet is fired from generates 50,000 psi, the bullet is kicked in the rump by 50,000 psi of pressure. But if base area is reduced to one-half inch, pressure exerted on the bullet is reduced to 25,000 psi.

When the same amount of pressure is exerted against 150-grain bullets in the .30-06 and .270 Win., velocity will be a bit higher for the .30-06 for two reasons. Its larger base diameter gives propellant gas a larger surface area to push against and a shorter bearing surface makes it a bit less resistant to being pushed down the bore of a barrel.

Moving to the opposite end of a rifle action, an increase in the head surface area of a cartridge results in an increase in pressure exerted on the breech-locking system of the action and vice versa.

Maximum recommended chamber pressure for the Model 1898 Krag in .30-40 caliber is 40,000 c.u.p. I have a handsome custom rifle on the Krag action built by Griffin & Howe during the 1930s, and it is chambered to .22 Hornet, which is commonly loaded to 47,000 c.u.p. That rifle never complains because, due to its considerably smaller head surface area, the .22 Hornet exerts only about half the pressure against the face of the bolt when both cartridges are loaded to their maximums. If a .30-40 cartridge loaded to the same pressure as the .22 Hornet were fired, both rifle and shooter would likely become very unhappy.

Back-thrust level is actually not that cut and dried. If the chamber is coated with oil, or if resizing lube is left on the case of a handloaded cartridge, all the pressure its head surface area can exert will be applied. But if neither of those is present, pressure during firing forces the wall of the case against the chamber wall firmly enough to prevent the case from moving to the rear.

At that point in time, the shoulder of the case is bearing hard on the shoulder of the chamber, and due to a small gap between the head of the cartridge and the face of the bolt, the case just forward of its extractor groove will stretch enough to allow its rear section to move rearward to fill the space. And while some pressure is exerted against the bolt, it is a small percentage of the total amount.

The amount of pressure exerted against the locking bolt is also influenced by the shape of a cartridge case. All else being the same, a case with minimum body taper – the .300 Win. Mag. for example – exerts less back-thrust than the .300 H&H Mag. with its considerable taper. This is neither here nor there for front-locking, bolt-action rifles because they are designed to handle far more back-thrust than either of those cartridges delivers when they are loaded to their established maximums. But it can matter in rear-locking actions due to momentary bolt compression and receiver stretch.

The higher the pressure, the more the bolt compresses and the receiver stretches, but as long as their strength limits are not exceeded, elasticity in steel causes them to spring back to their original dimensions.

Years ago, I traded for a Marlin 336 and decided to rebarrel it for the 7mm STE wildcat I was working on, which is based on the .307 Win. case. At first I did nothing more than neck down the .307 Win. case to 7mm. But in working up loads, I experienced sticky extraction prior to reaching expected velocities and well below reaching maximum pressures.

Then I recalled one of many experiments described by P.O. Ackley in his two-volume Handbook for Shooters & Reloaders. He had rechambered a Winchester Model 94 for his .30-30 Improved, and the wall of the case gripped the wall of the chamber so tightly the rifle could be fired with locking bolt removed. Do not try this! The point is, by simply changing the shape of the cartridge – in this case, reducing body taper – he significantly lowered cartridge back-thrust.

With that in mind, I proceeded to blow out (improve) the .307 case for less body taper. With the corresponding reduction in back-thrust, I was able to reach my velocity goals with no extraction problem and at slightly less pressure than the .307 Win. is commonly loaded to 52,000 c.u.p., a level shared by the .307 Win. and the original chambering of my Marlin (.356 Win.)

I achieved 2,900 fps with a 120-grain Nosler and 2,700 fps with a 139-grain Hornady. Those loads for the cartridge were published in the 26th edition of Hodgdon’s reloading manual.

Actual chamber pressure can be influenced by many things. I’ve detailed a number of them in the accompanying charts – and a big “thank you” to Hodgdon for generating these data for the article.

Switch from one bullet to another of the same weight but of a different style – or from a different maker – with powder type and charge weight remaining the same and pressure may increase, decrease or remain the same. Fire the same load in two rifles chambered for the same cartridge and pressure will be higher in the one with tighter chamber and bore dimensions.

This is not a problem with factory ammo because pressure barrels used for testing are chambered and rifled to absolute minimum SAAMI dimensions. Manufacturers of mass-produced barrels are allowed to keep them within a minimum/maximum allowable tolerance range, and while factory ammunition fired in the former will produce higher pressure than in the latter, it should still be at a safe level.

The capacities of cartridge cases from various manufacturers can vary slightly, and that, too, has an effect on pressure. Switching primers can increase or decrease pressure. The same applies to varying the seating depth of a bullet in the case. Allow a box of cartridges to bake under a hot sun for several hours and when fired they will generate higher pressure than if left in the shade. I could probably think of a few more, but I’m running out of space.

Hard bolt lift is one of the more common signs of excessive pressure. Another is the appearance of a shiny circle on the head of a case fired in a rifle with a plunger-style ejector. And what makes it shiny? Pressure causes the brass to extrude back into the ejector tunnel and when the bolt is rotated, the top of the extrusion is sheared off by a sharp edge at the mouth of the tunnel.